This is going to be my link for future posts so that the people new to this blog, and those of you who want to refresh your memory, can see what scientists Klaus Heinemann, Ph.D., and Dr. Miceal Ledwith (a theologian with a scientific interest), who co-authored the book, The Orb Project, say about orbs. 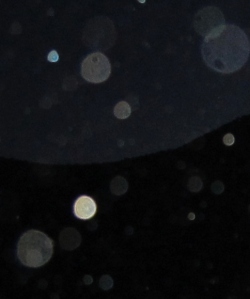 Dr. Heinemann, who received his Ph.D. in experimental physics and worked as a materials science researcher at NASA and UCLA, and as a research professor at Stanford University, thinks that orbs are the “emanations of spiritual beings” and he also says that to call them orbs is disrespectful, like calling royalty by their first names. Never mind the titles of his two books, The Orb Project, and Orbs, Their Mission and Messages of Hope (co-written with his wife Gundi Heinemann). His theory that they are emanations is likened to our seeing car lights in the dark, but the lights are not the driver.

In his books Dr. Heinemann presents data that dismisses sceptical views that orbs are simply dust particles or water molecules. He also shows a photo of an orb taken in a “clean room” a lab that is dust free. There is an interesting photo of faked orbs that is very similar to photos I’ve seen on the web where someone sprayed water into the air and called the round drops “orbs”. They make for very pretty pictures, but are too uniform compared to the clouds of orbs you can find just outside your door without all the bother of faking them. Below is a cluster of orbs that I found hovering over a bush this summer, you can see that some are round, some are colored, some are teardrop:

Dr. Miceal Ledwith has a theory that the light we see coming from orbs is due to the camera’s flash stimulating something inside the orb that makes it fluoresce back to the camera. Brilliant sunlight can sometimes have the same effect so that occasionally you’ll get orbs in your non-flash daylight photos.

Dr. Ledwith also speculated that the occasional hexagonal shape is caused by the orb’s fluorescence reaching the camera just as the shutter is beginning to close.

I have noticed that orbs respond to strong stimuli such as a singer who can really belt out a song. They also manifest around performers who are playing with great passion and enthusiasm.

Above is the Andy T Band featuring Nick Nixon who used to be an opera singer.

I encourage everyone to go on a quest for orbs. As Dr. Miceal Ledwith says, you don’t have to suffer the discomfort of looking for them on a cold night in a graveyard, they aren’t ghosts. You can just step outside and start taking flash photographs. If you live in a densely populated city like New York, you might want to go to a park, but you could also very well find them soaring over the streets like I do in downtown Bisbee, Arizona.

Flash photography extends our narrow visual range so that we can now perceive orbs, who were always there, we just needed finer tuned instrumentation to see them.

Thank you to Klaus Heinemann, Ph.D., who took the time to look at this blog, enjoyed the photos and encouraged me to continue my quest for orbs.